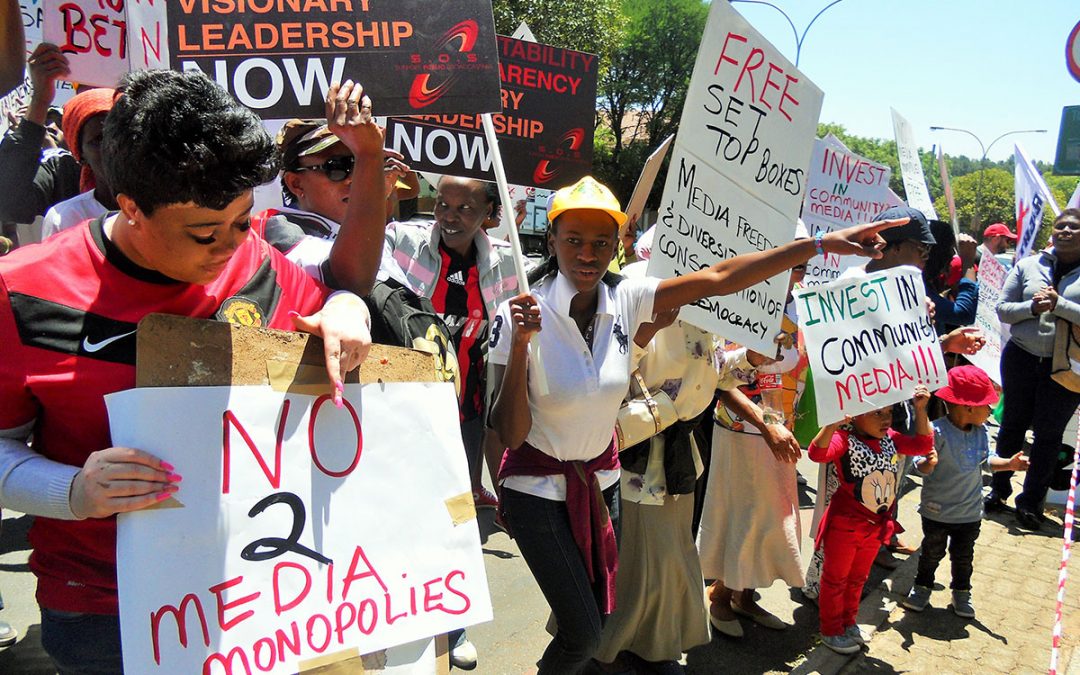 When you have to choose between buying food for your family and purchasing a newspaper, the choice is simple.

If you live in Africa, the type and amount of media you get largely depends on where you live, which languages you speak and how much money you have. Many people, particularly the poor, have little or no choice about the media they receive.

The reality of unequal media access is a mirror of the overall inequality of African societies. In cities across the continent, shopping malls and supermarkets are mushrooming, suggesting that purchasing power is increasing. But that is only true for a small part of the population. Most Africans are poor, and their choices are limited.

While expensive private health care and education is open to the wealthy, the poor rely on state-funded, basic services. It’s no different with the media. A small, middle class can choose from a variety of media; the poor make do with what they can access cheaply or for free. Corporate media outlets, like other private services, often exclude the poor.

Private and corporate media flourish all over the continent, but are consumed by a minority middle-class audience that has the expendable income to pay for them.

Unaffordable, out of reach

In Ghana, a newspaper costs nearly half of the daily minimum wage. In Kenya, the price is higher than a packet of milk. Many poor cannot afford such ‘luxury’ items. In addition, mainstream newspapers are mostly distributed in urban areas, out of reach of those in rural areas. In Botswana, 70 per cent of the sales are within 100 km of the capital.

Commercial radio and TV have mushroomed over the last decades – but again, access depends on where you live. These stations focus on the urban areas and are often inaccessible to rural audiences, which form a sizable part of the population.

They broadcast mainly in the languages spoken by the former colonial powers, so people rarely receive media in their native tongues. Reception is hampered by a lack of electricity in many countries. In Zambia, around three per cent of the rural population is connected to the electricity grid. In Uganda, it’s four.

Private media coverage often reflects the interests of this audience. Stories about poor communities and their struggles are rarely reported on. The result is a lack of a diversity of voices, opinions and world views.

The perils of concentration

When a small handful of companies own most of the media, two things tend to happen. Access to the media becomes expensive, and a certain uniformity sets in – the same story may be featured across the outlets owned by the same company. Diversity of content suffers.

In many countries, the media market is highly concentrated with a few prominent players dominating each sector. Often, leaders in the print sector expand into radio and television. Radio owners with substantial capital buy out smaller competitors.

That means people on the ground have a lot less choice.

Research conducted by the Media Policy and Democracy Project in South Africa paints a dire, yet predictable picture. The overall market is monopolised; a few companies dominate each media sector. For the poor, media content is almost entirely dominated by one outlet – the state-run, public-service broadcaster, the South African Broadcasting Corporation (SABC).

The predominance of state-run broadcasters is similar all over the continent. But the media outlets which run crucial exposés or publish investigative stories by brave journalists, rarely reach the majority. Most people only see and hear the perspectives from state-run, and state-influenced, outlets.

Can online and community media fill the gap?

Independent online media thrives in Africa. In South Africa, blogs and news websites can be quite different in tone and coverage than corporate or state-run media. News sites such as Groundup, the Daily Vox or the Daily Maverick adopt a more grassroots perspective to reporting, and run stories more relevant to the interests of the South African poor.

Access to this content is “free”, but only if one can pay for internet data. In Kenya, it comes at a price: 3 000 Kenyan shillings monthly for unlimited access, the cost of a pair of jeans. Research published by the South African LINK Centre at the University of Witwatersrand shows that in poorer communities, people often have to choose between buying food and paying for data packages. When the cost of data is high, they’re likely to use it for low-cost social media services, not downloading news articles.

Community media, such as community radio stations, are mushrooming in many African countries, but they struggle to survive. Most rely on limited advertising revenue and frequently face political interference. Large media corporates often deliberately force community media outlets out of business.

Media diversity is important to society because access to a wide variety of opinions, ideas and world views is fundamental to the formation of individuals’ views on society and politics. This is essential to democracy.

Therefore, if Africans are to be informed participants in their society, then access to a wide range of good quality media is vital. It is crucial for them that access to media be easy, affordable, and in languages they speak. The predominance of media conglomerates and their emphasis on their own commercial interests form a high wall between the poor and everything that the media has to offer them.

Julie Reid is a Senior Lecturer at the Department of Communication Science at the University of South Africa and a project leader for the Media Policy & Democracy Project.