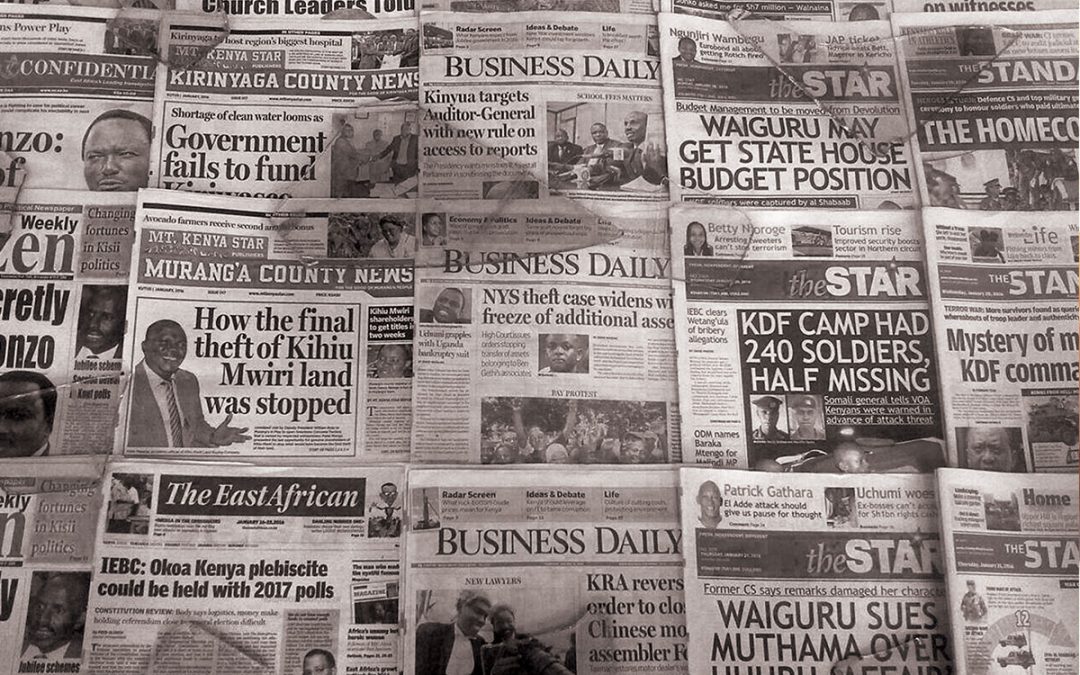 After four decades in print, publisher Gwen Lister says she’s been called a “dinosaur” because she was and remains a believer in newspapers – even in the face of the digital tsunami.

As the digital revolution and new technologies gain impetus, the media world changes with almost frightening rapidity. The survival of traditional media, print in particular, will depend more than ever before on journalistic excellence and staying connected with audiences.

Many have all but buried newspapers as relics of a bygone era. While the readership decline is especially evident in the United States and Europe, all hope is not lost elsewhere. The 2014 World Press Trends Survey of the World Association of Newspapers (WAN) shows print circulation increases in Asia, Latin America and Africa.

But that won’t always be the case, caution others. I’ve heard publishers warn that Africa’s newspapers will inevitably face the same demise as digital and online media become more accessible and listened at various international media forums to talk of algorithms, stealth models, fast flips and going viral, all accompanied by warnings that print’s time is simply up.

I find the eagerness to write off print inexplicable in view of its often proud legacy: holding power to account and contributing to literacy where libraries are in short supply, not to mention the work of brave journalists who risk so much for the truth.

The power of print

Print has always been my passion – from my beginnings as a journalist in 1976 to the founding of The Namibian in 1985, at the height of apartheid South Africa’s occupation of the country, to my current role as publisher. I remain a believer.

It was no easier to start newspapers then than it is to sustain them today. Advocates of an independent press in Africa faced tough challenges as political, financial and technological constraints dogged our efforts every step of the way.

As the 1980s came to a close, it was a case of the survival of the fittest. The African media landscape is littered with the skeletons of once-brave newspapers. But many did survive and still continue to “shine a light into the darkness”.

It was mainly print journalists who were the flag-bearers for an independent media in Africa. Their commitment to media freedom culminated in the adoption of the groundbreaking Windhoek Declaration on 3 May 1991 – which the UN later marked as World Press Freedom Day.

I am optimistic that journalists of the same calibre can again lead the way in ensuring the survival of print – provided they and their newspapers, editors and owners, don’t rest on their laurels.

Freedom of speech and expression can never have enough defenders. The digital world has been indispensable in giving voice to “people’s revolutions” in situations where vibrant and independent print and other traditional media were unable, under-equipped or prohibited from doing so.

But I remain resistant to the idea of a totally online world. There is need for the coexistence of multiple-platform media, and print should have a place in the mix.

The digital world also faces its own constraints of government regulation and shutdown. We’ve already seen this, most recently in the 2016 Ugandan elections.  Print and online media must be mutually supportive when it comes to guarding our freedoms. Both are vital constituents in the democratic process, and together can contribute to the development of an engaged citizenry and true media pluralism.

Free speech and media were once considered the exclusive prevail of journalists. This is no longer the case – the right to freedom of expression belongs to all people. The combined strength in numbers of both traditional and new media, if harnessed, will surely give great impetus to the on-going battle for freedom of expression and access to information, not only in Africa, but across the globe.

I’m convinced that a world in which there are no newspapers would be a joyless and uniformed world, indeed. Those of us who started our careers in the era of hot lead, typewriters and telex machines, and who still believe the pen can change the world, must be prepared to adapt and innovate.

The biggest danger to newspapers is undoubtedly the loss of public support. It remains critical to enhance professionalism, investigative skills and a commitment to ethics among journalists.

This can be done in a number of ways. Gone are the days of big print newsrooms and expensive foreign bureaus. Lean, mean and specialised should be the new watchwords.

Most newspapers today have already created an online presence in a bid to remain relevant. Important choices need to be made on varying content for the print and online platforms. The newspaper content of the past, with a broad spectrum of international, local news and sport, columns, editorials and letters pages, needs a total overhaul.

Digging deeper, including cross-border collaborations in investigative reporting, in print and online, to maximise resources, reach larger audiences and save on newsroom costs, is one of the ways to go.

Publishing in local languages and providing SMS short-message pages to create a conduit between people and government are just a few of the successful innovations at various African newspapers.

Print has to become more global, yet more local in its reach.

Owners and publishers must be prepared to place a premium on principled journalism before the profit-at-all-costs approach, which has also contributed to editorial compromise and dented credibility among readers.

Still a place at the table

Africa’s internet growth can’t yet match the boom in mobile technology access on the continent, and there’s a difference between noise and news. Information may have become more “democratised” online, but people may tire of what has been described by a lecturer from the London School of Economics as a “race to the bottom in terms of ethical standards”.

The perception that Facebook is the internet and the inability of many on social media to differentiate between hate speech and free speech as well as other online abuses play directly into the hands of governments looking for excuses to “regulate” freedom of expression online. Media literacy campaigns about online media are crucial.

And sooner or later, there will be those who seek out alternative sources of reliable news and information. Newspapers could be there to offer them what they want.

It may be true that the newspaper reader of old has all but disappeared. But it’s the job of newspapers to get their attention once again, and I’m convinced the recipe lies in a local and community-based approach to what people both need and want to know.

If even the Newspaper Association of America acknowledges that “newspapers continue to innovate and transform, reaching new audiences and discovering new revenue streams”, surely we in Africa must do the same before real decline sets in. The question is whether we have the will and the resources to do what is necessary to ensure that print media not only survives, but also thrives in the process.

Gwen Lister is the Founding Editor and currently Publisher of The Namibian newspaper, which is owned by the Namibia Media Trust.

This article is an adaptation of a piece that originally appeared in the AFRICAN FREE PRESS, a MISA